Home » Uncategorized » RU Kidding Me?: How NJ Legislature Will Cause Rutgers to Fall Behind in the Big 10
Tue19

RU Kidding Me?: How NJ Legislature Will Cause Rutgers to Fall Behind in the Big 10

Posted by Eileen Garretson on Oct 19, 2021 in Uncategorized 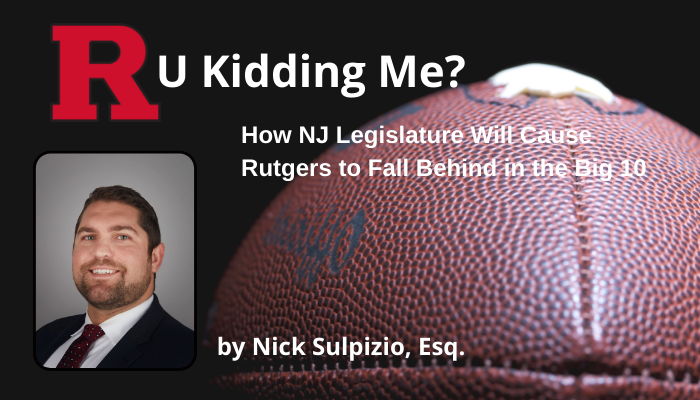 The groundbreaking Supreme Court of the United States case, NCAA v. Alston, opened the door for student-athletes to obtain compensation for use of his or her “name, image, or likeness” (“NILs”) in marketing or promotion materials at a local, state, regional, and national level.[1]  In Alston, the Supreme Court agreed with the challenging group of student-athletes that the NCAA rules limiting compensation compared to that offered in a free market violated federal antitrust regulations.[2] Until Congress passes uniform federal legislation, there is no guidance and states are left to create their own legislation.  Right now, 15 states have legislation pending and 26 have NILs legislation passed, which includes New Jersey. This author believes the NJ legislation is problematic and needs to be fixed.

The New Jersey legislation “allows certain collegiate student-athletes to earn compensation for the use of their [NILS]” and a “four-year institution of higher education will be prohibited from upholding any rule, requirement, standard, or other limitation that prevents a student of that institution participating in intercollegiate athletics from earning compensation as a result of the use of the student’s [NIL].”[3]  However, there are several limitations of the Legislation: (1) the bill only pertains to four-year institutions of higher education; (2) any individual athlete NILs contract must not conflict with any provision of a student-athlete’s team contract; (3) student-athletes must not enter into NILs contracts with any “scandalous” or “adult” entities, such as adult entertainment, gambling, firearms, prescriptions, pharmaceuticals, and tobacco, and last but certainly not least; (4) the legislation goes into effect in the fifth academic year following the date of enactment (which was September 14, 2020).[4]  This means New Jersey student-athletes would not be able to profit from his or her NILs until September 14, 2025.

The last of these limitations is the most hindering when considering the legislation from other surrounding states (especially those in Big 10 country).  Pennsylvania’s NIL law was enacted in the Commonwealth’s 2021 budget, taking effect immediately.[5]  Maryland’s NIL legislation was signed into law but does not go into effect until July 2023.[6]  Ohio’s governor signed an executive order and was introduced into the state’s budget so that student-athletes are able to immediately enter NILs contracts.[7] Michigan’s legislation was signed into law and takes effect December 31, 2022.[8]  Indiana, notably, does not have any legislation passed regarding NILs, meaning Indiana student-athletes are able to profit from his or her NILs as long as within the NCAA’s policies.

Since New Jersey’s NILs law permitting these contracts does not go into effect until 2025, student-athletes who are committed or enrolled in New Jersey institutions may elect to transfer or decommit in favor of another school.  As a direct result of New Jersey’s legislation, Rutgers and other four-year institutions may be left behind in the NIL dust when trying to recruit student-athletes to campus for the next few years.

Contact Nicholas E. Sulpizio, Esq. for legal advice when seeking to enter a NILs contract to ensure compliance with all applicable rules and legislation.